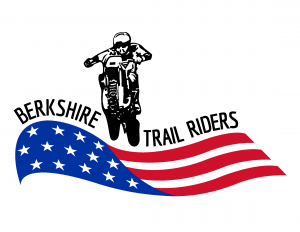 Founded in the early 1970s as the Foothill Trail Riders and later incorporated in 1992, the Berkshire Trail Riders Association is a 501c3 non-profit that advocates responsible off-road motorcycle riding, competition and local philanthropy in the greater New England region.

The group maintains the trails they ride and promotes their preservation through trail work parties several times a year, while working alongside various local, state and federal agencies.  Other than those on private lands, the trails are open to the public for other uses.

Over the years, the Berkshire Trail Riders Association has donated to both local and national charity organizations including Hospice in The Berkshires, local fire departments and EMT units, police departments, state forest and Massachusetts Department of Environmental Protection agencies, locals who lost homes in fires, accident victims, private and public land owners, and The Ronald McDonald House Charities.